As you have noticed, I'm just about the worst blogger EVER lately. The hustle and bustle of life has just been overwhelming lately...with the transitions at my job, to transitions in my personal life and great growth in my event planning business...life is just a "little" crazy.

I have been (poorly) operating two blogs, The Leafy Green and Bliss Events by Rachel. This blog has obviously been more about my personal life and our lifestyle while my Bliss Blog is mainly geared toward weddings and events. Well, after much thought, I've decided to consolidate the blogs and continue with only posting to my Bliss Events by Rachel blog.

I have loved The Leafy Green and have so appreciated all the support! I hope that you will continue to read about our tasty recipes, fun DIY projects and silly life "happenings"...tossed in with some wedding and event fun at www.blisseventsbyrachel.blogspot.com.


Again, thanks so much!
Lovingly Created by Rachel Henry No comments: 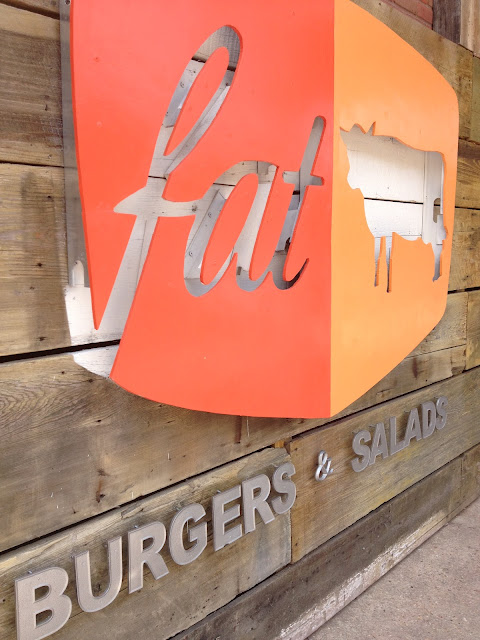 Any of the burgers can be served with a salmon fillet or a giant portobello mushroom. I'm currently head over heels in love with the Napa Burger, which stars sliced pear, red onion marmalade, goat cheese and fresh arugula. Thank you mam!

I had eaten my entire burger before I realized I hadn't taken a picture. So here is one of the 120 burger that Chris got. It had gruyere cheese, caramelized onion, fresh arugula, sliced tomato and horseradish mayonnaise (sans the bacon, of course!). I'll say this...I didn't love it but Chris did...to each their own! 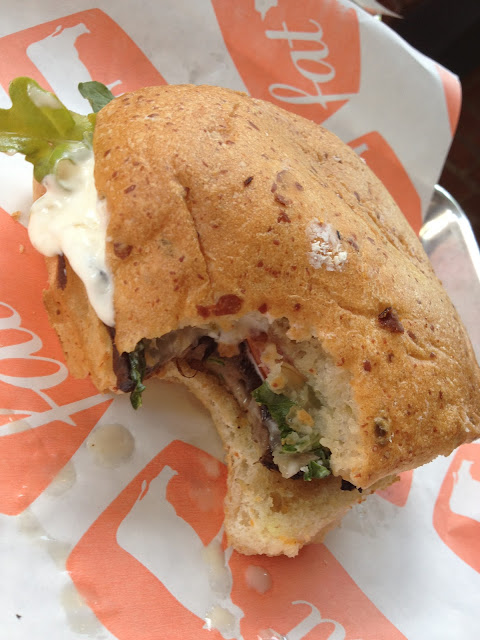 Fat Cow is very kid friendly. Their patio is cool with lots of shade...perfect for a little family outing. They also have a great selection on their kids menu. Lily loves their grilled cheese sandwich! 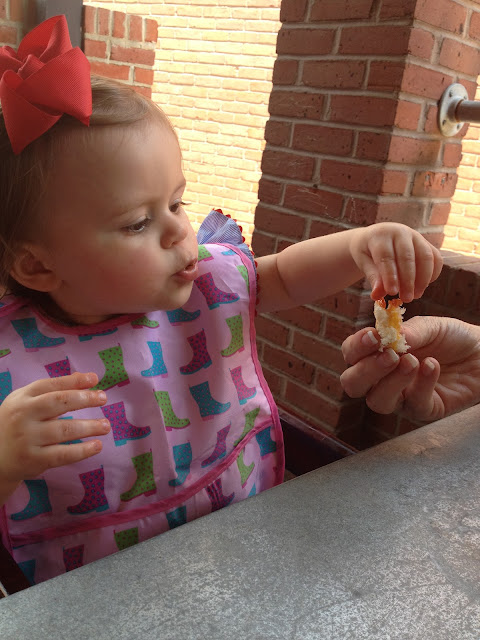 We hope you and your families had a fabulous Fourth of July! Here are some other photos from our relaxing, stress-free holiday! Enjoy! 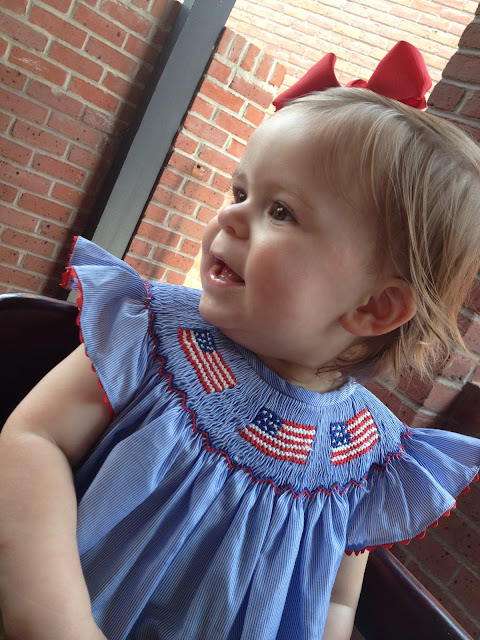 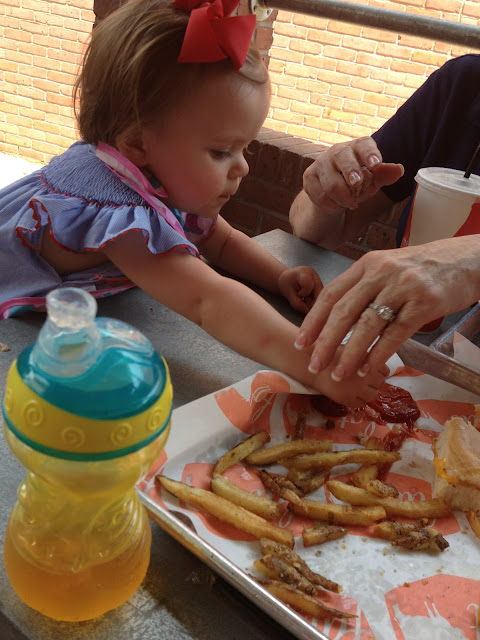 She always wants to feed herself! Very independent! 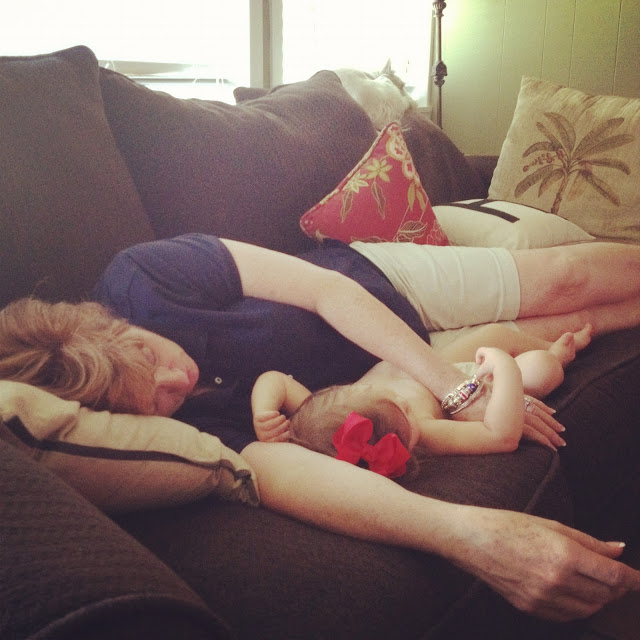 Lily and GranZee were just pooped after lunch...so naptime on the couch it was! 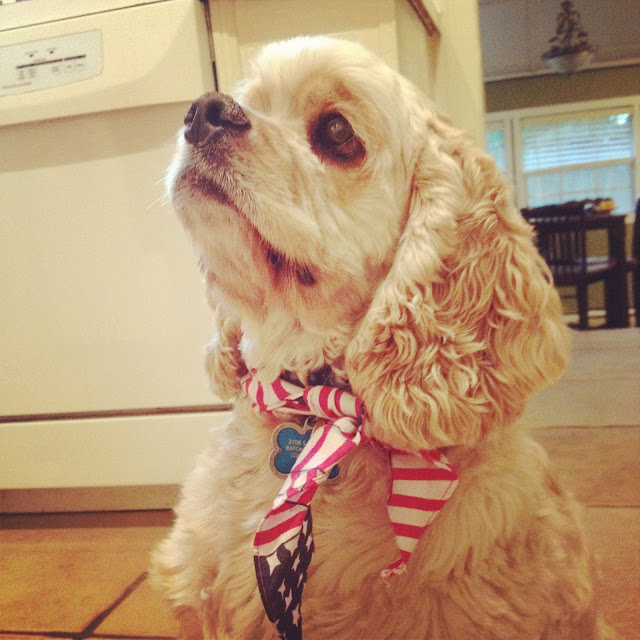 Of course Oliver had to get in on the action...what a patriotic puppy! 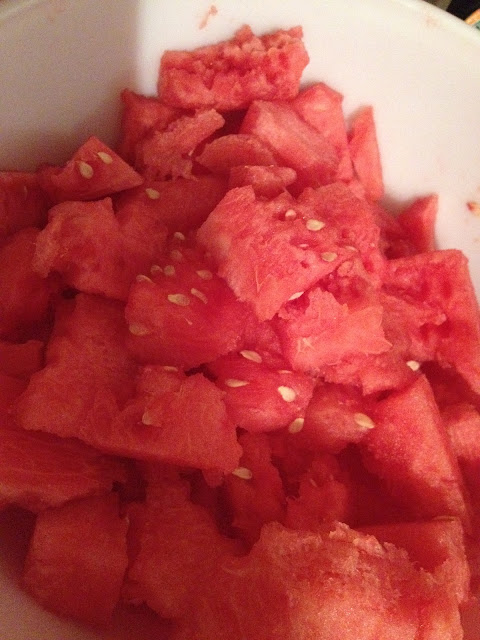 No Independence Day is complete without tasty watermelon! 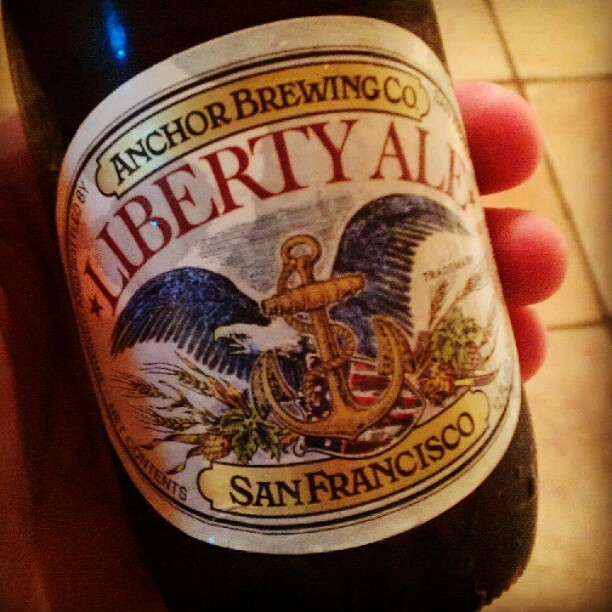 Finishing the day with a little Liberty Ale!


I know...summer is half way done and I'm just now talking about my to-do list. To put it nicely...life is a little crazy right now!

Anywho...the Henry's have a lot going on right now so our summer to-do list is a MUST to-do list!

1. Get our house ready....this is top of our must-do list because we are in the very early stages of wanting to sell our home. This will NOT be easy for me...this is the home where Chris proposed, where we started our family and have had so many fun memories made...BUT, we are quickly outgrowing our fun little three-bedroom house...so it's time to move on. We are starting by removing a lot of our personal items and making the space more generic. Thankfully, there isn't a ton of projects that we need to tackle...but we are going to do as much as we can, while we can!

2. Have some date nights...we are so horrible about this! Now that Lily is at that awesome fun stage, we hardly ever carve out time for just to two of us...but that's one of our goals this summer! I'm not sure what we are going to cook up...but it will most definitely involve good food...so I'll make sure to share!

4. Have some family fun...now that we have a few weekends that are free, I want to fill them with fun family time! Lily is running around loving life...which is just a blast! So I want to start filling her scrapbook with fun memories!

5. Get in gear...both Chris and I have established some hard core fitness goals recently. Unfortunately, they are on two separate ends of the spectrum. I, of course, am still wanting to lose some weight but Chris needs to gain it. So, as challenging as this sounds, we are going to make it work without cooking two separate meals every day! We can do this! He has been grooving for a couple of weeks now but I'm kicking it up a notch this week! I found this 7-day cleansing diet (thank you Pinterest) that I started today...more on that later!

So this is just a glimpse into what I would like the rest of our summer to look like. We have a lot going on...but I'm hoping to enjoy it a bit too!


What are your summer plans?
Lovingly Created by Rachel Henry No comments: 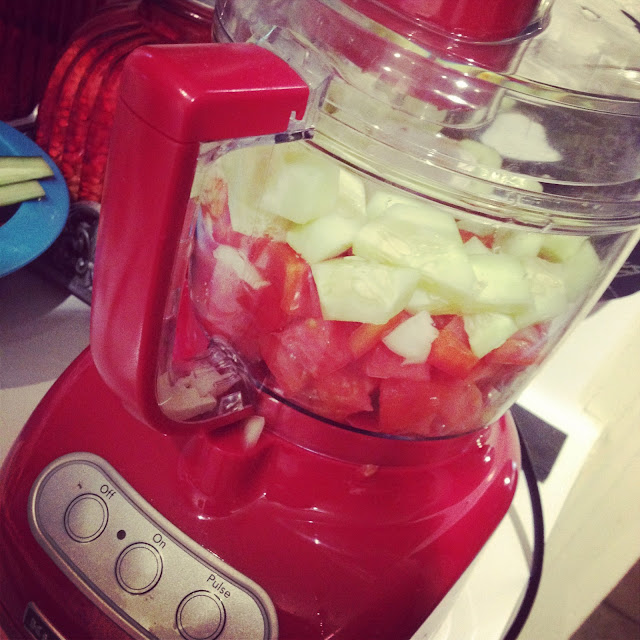 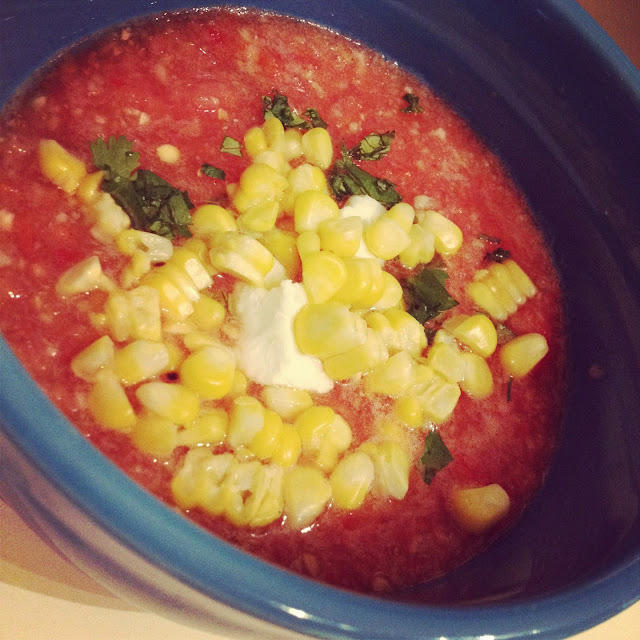 This might shock you, but until recently, I had never had gazpacho! I know...shocking! I was perusing the Internet the other day and came across this gazpacho recipe from Real Simple and it was just that...real simple! So I tried it...and..eh...

It was a refreshing treat and would be perfect for maybe a cocktail party or summer fun day...but not for a random night dinner. You live your learn, I guess. Another thing that threw me off was the real onion taste...I mean, it just hits you. So when it says 1/2 of a small sweet onion...really look for the smallest one in the  bunch!

Anyway, here is the recipe...enjoy!

Toss your tomatoes, garlic, onion, bell peppers and cucumbers in a food processor and pulse until just about pureed. Unless you have the largest food processor EVER, you are going to have do work in batches until all is added.

Transfer to a large bowl and stir in the lemon juice and salt/pepper to taste.

Ladle the soup into your serving bowls and top with goat cheese, corn and cilantro. Drizzle with olive oil and serve with crusty bread! 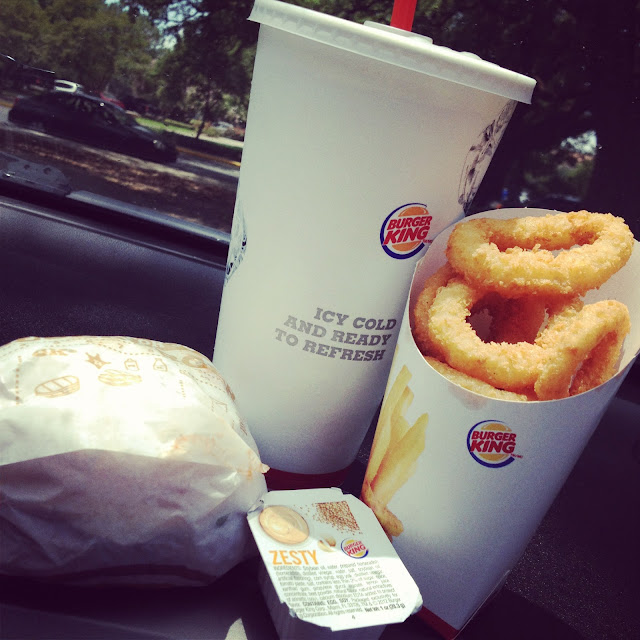 Let me preface by saying a dear and beautiful friend of mine recently got engaged and I am beyond excited to stand up with her on her wedding day as she marries the man of her dreams...but after hearing the names of the bridesmaids...mama has to get serious about slimming it down!

So, say hello to my last "fatty meal"! Burger King is one of the few fast food restaurants that we can drop by when time constraints...ok, laziness... get the best of me. Their veggie burger isn't a key item on the menu, but if you search...you'll find it. I pair that bad boy with a monster size coke and some onion rings with zesty sauce and the fat kid inside me is a happy camper. The responsible, food loving, caring parent however...is ashamed.

Alright, in all honestly, this probably isn't my "last" fatty meal before the spring...but I am going to make a conscious effort to steer clear! Wish me luck!
Lovingly Created by Rachel Henry 1 comment:

One of my favorite things about being a mommy to a toddler (wow...where did the time go!) ...is watching Lily discover new foods. My biggest fear is that we are going to have a picky eater. So, to push her to being a lover of food like her parents, we are having fun introducing new colors, textures and tastes. Her reactions are the BEST! The only heart breaking experience we have had so far...she hates avocados! No matter how we dice it or spruce it up...she isn't fooled!

She loves to eat but hates being fed...she wants to do it all herself. Miss Independent already. So, finger foods it is! Since we are having so much fun stuffing her little sweet cheeks, I'll start sharing our experiences...the good, the bad, and the adorable!

I got the recipe from one of my go-to sources of baby food fun...Weelicious. They have such creative ways to spice up the everyday lunch box...which I'm all about! This salad was a no-brainer to try because it is completely vegetarian, so no need to tweak too much, and it's so much fun! Not too messy, very colorful and healthy...win, win, win! Here ya go...

We had every intention of grilling the corn to spice it up...but there was a hungry little girl running around my feet, so off the grill the ears of corn came and into the pot! It was just as tasty...and Lily didn't seem to mind too much!

So, bring about an inch of water to boil and add your corn. Cover and steam for 5 minutes and then remove and let cool. While your corn is getting ready, go ahead and mix all of your other ingredients in a bowl. 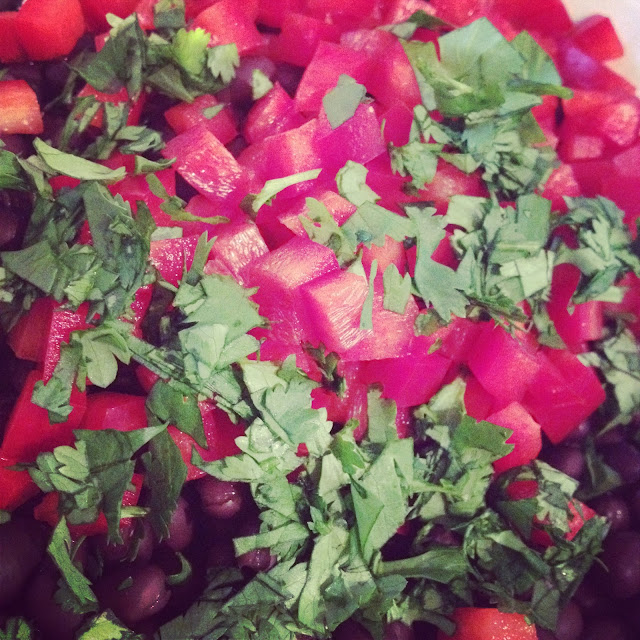 Once your corn is cooled, add it to your party...stir and serve! So easy! 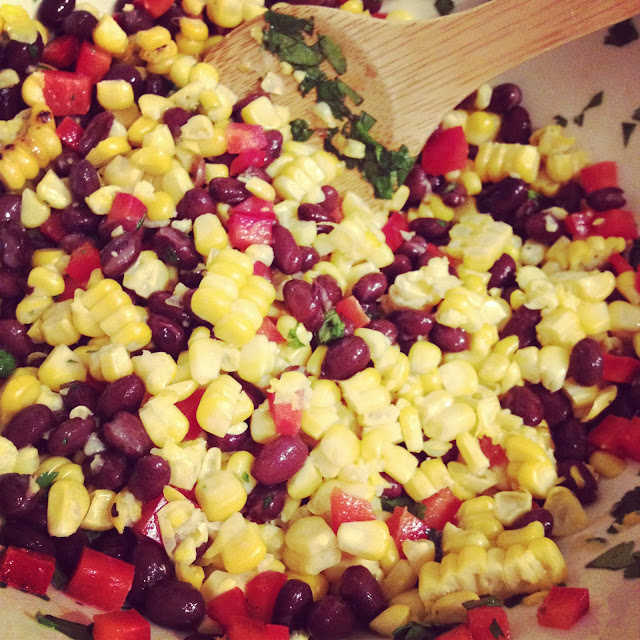 Doesn't that look so tasty? Trust me...it is! Lily LOVED it! Black beans are one of her favorite things right now so she ate all the black beans first...and then dove head first into the bell peppers and corn. ﻿ 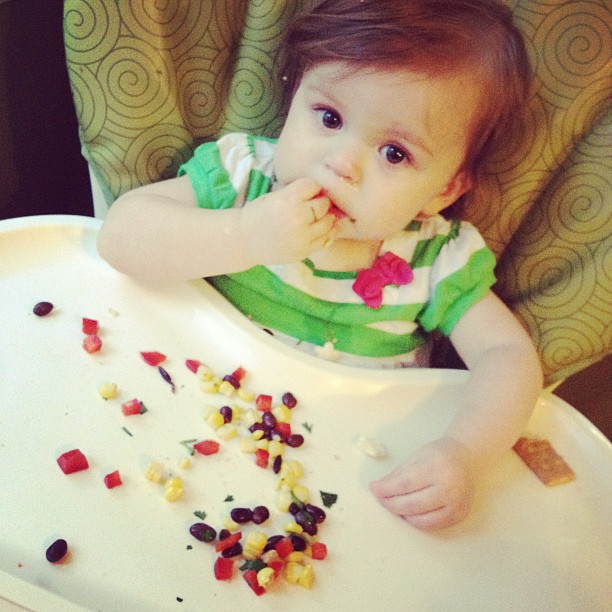 Hope you all have a fabulous weekend! There is so much going on around town so have fun!
Lovingly Created by Rachel Henry No comments: 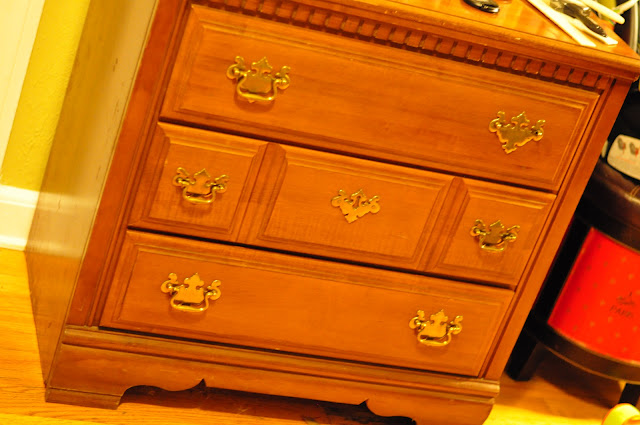 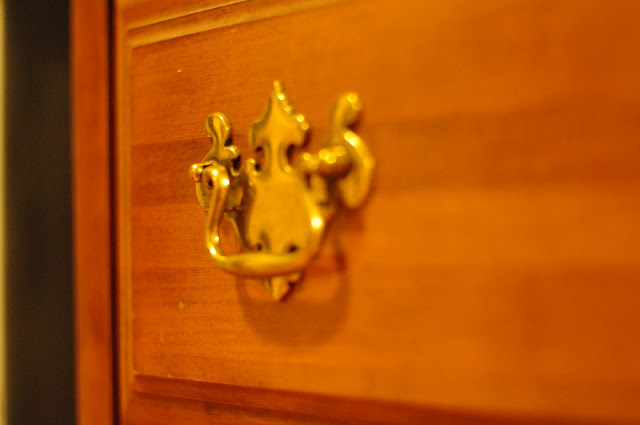 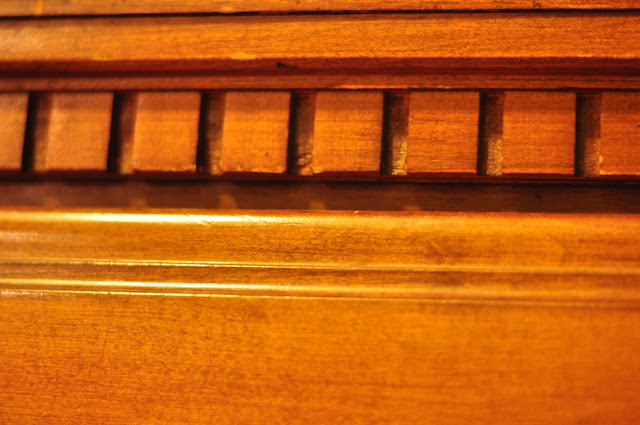 I complained on Facebook several months ago that I couldn't find a chest of drawers that would be a perfect fit for a "catch all" I wanted to create for our entry way. I had scoured thrift stores, garage sales and Craigslist...with no luck. Minutes after my status was updated, a friend of mine came to the rescue! They were just about to trash this chest so we ran over, picked it up...and I started planning!

After a couple coats of paint, some sanding, a little glaze and some vinyl letters from the Cricut... BAM step one complete! 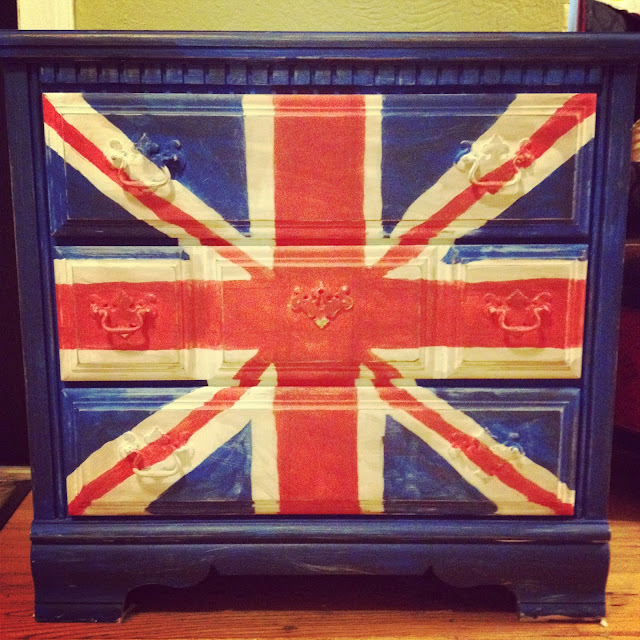 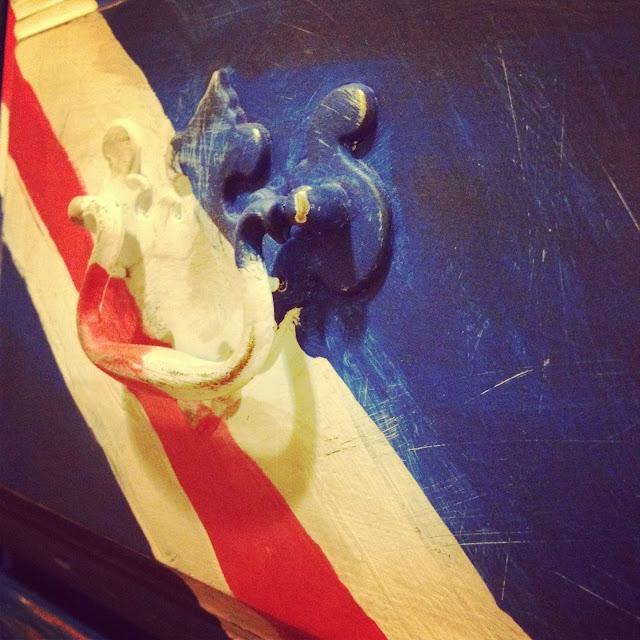 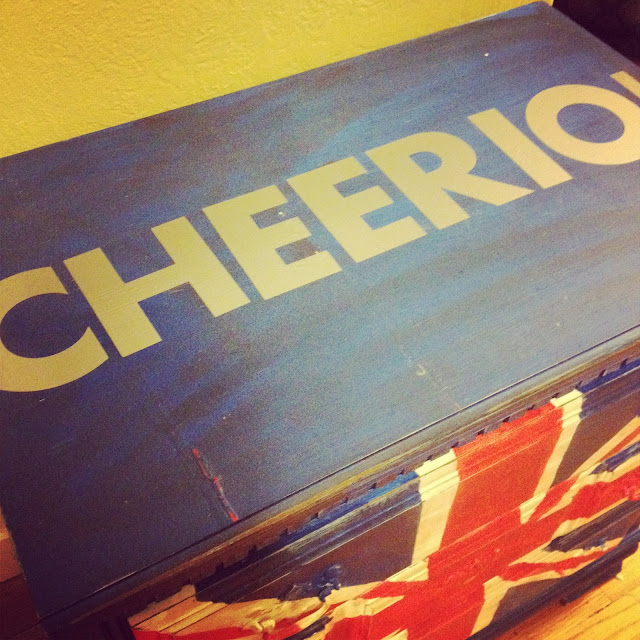 Next step, making it an organization tool! Stay tuned!
Lovingly Created by Rachel Henry No comments:

Can I help you?